← Inside Durga’s Kitchen
Babies for Gays →

Autograph, Srijit Mukherjee’s first film was a tribute to Satyajit Ray’s Nayak. Although not a brilliant film, it gave us a sneak peek into what Srijit is capable of. 22se Srabon establishes him as a director par excellence. Tribute the unsung poet found in almost every Bengali home, the film touted as a musical thriller, delves deep into the human psyche and shows us a dark facet of life, answers to which we seldom seek.

Taken from some blog

Poetry is the crux of literature in any part of the world. It took Srijit Mukherjee to make poetry a character of the film – it spoke, played its part and in the end emerged as the real winner. Bengali literature will always be indebted to Srijit for 22se Srabon – this beautiful amalgamation of bengali cinema and bengali literature will go down the pages of history as a relic. To supplement the poetic screenplay, was the background score which accentuates your cinematic performance. The aalap when Parambrata enters Prasenjit’s house still haunts my ears.

We have known Gautam Ghosh before as an ace director who has won accolades all across the world, we have known him as a cinematography wizard who has given us films like Mr and Mrs Iyer. 22se Srabon gives us Gautam Ghosh, the actor, who almost everyone can relate to – the idealist poet, whose words the State refuses to hear, driving him to “insanity”. But was he really insane?

22se Srabon is his career best performance by Prasenjit. His opening scene took me back to “The Last Lear” – i had thought no one can match the persona of Big B ever. I was happily proven wrong. And proudly so, by an actor of the Bengali film industry. The arrogance, the indifference, the angst, and moreover the quite mind game playing in his eyes – Prasenjit gifted us a magical performance on his 50th birthday.  22se Srabon is what it is for the brilliant screen presence of the two actors – Gautam Ghosh and Prasenjit Chatterjee. 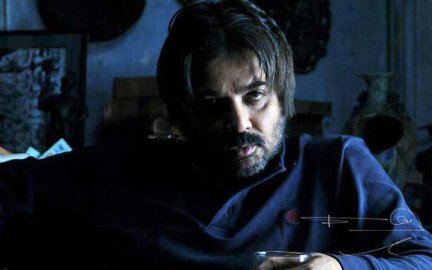 Taken from some blog

Many films have been made from poetry. Sob Choritro Kalponik, Jara Brishtite Bhijechilo have been the most recent ones i can remember. But they failed to engage us into the words like 22se Srabon did. To even conceptualize murders which enliven couplets penned by stalwarts like Joy Goswami, Binoy Majumder, Shakti Chattopadhyay, Jibanananda Das, Michael Madhusudan or Sukanto, requires a great knowledge of their works.

This film also subtly gives us many messages in the one liners that the film is full of. The unabashed use of expletives (in the vernacular) can give the makers of Delhi Belly a run for their money. But that does not make you uncomfortable seated between two elderly ladies in the theatre. The characters are as real or normal as we are. We share their pain, relate to their grief. From the loss of your wife and child to the constant tangle between boyfriend and best friend, the subplots in the film just enrich the two and half hour long experience.

22se Srabon must be watched by all. For the love of bengali cinema, for the love of poetry, and above all to learn a lesson. We tend to ignore the dark domains of our psyche, and in doing so let it capture our existence to an extent of living death. And as one of the characters says “Dada ami bachte chai”, the message we all can take from 22se Srabon is to live life.

Eagerly waiting for Srijit’s next film.

← Inside Durga’s Kitchen
Babies for Gays →