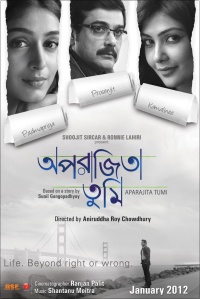 Music in today’s films has a very short half life. It hits the target (audience) with high impact; buoyed by the momentum lasts over a considerable time period and then slowly decays into oblivious alleys of public memory(only to be dug out on occasions).

Exceptions prove the rule, they say. And in the case of music too, there are exceptions – many for that matter. Of late, music in Bengali cinema has seen a sea change. Amidst the noise, music has emerged and how! After all, the lotus blooms in the mud.

In Aniruddha Roy Chowdhury’s films, music has always been an important component. Like salt is to food, music is to his cinema. The journey that began with Anuranan, peaked with Antaheen. While Aparajita Tumi cannot boast of being better or at par with Antaheen, Shantanu Moitra surely carves his niche with this album.

An unconventional mix of genres, a package that soothes the soul. no matter what mood you are in, the OST of Aparajita Tumi stops short of giving away the narrative of the film through the music. Srijato and Chandrabindoo reassert their poetic prowess – the words hit you hard and there is no way you  can steer clear of the magical state of bliss they transport you to.

The best song in the album is definitely Take Me Home for its lyrics and Shadow Tales for the haunting melody. Aparajita Tumi is a complete nutrition for soul – from the vibrancy of Take Me Home to the brooding Shadow Tales, the romantic lullaby Roopkothara or the innocently apologetic Bola Baron – Shantanu Moitra bares his emotions through his guitar.

Aparajita Tumi is a collector’s delight, yes even in this age of piracy you would want to buy a CD.

P.S. The brilliant score only adds to the excitement for the movie slated to release later this month. Eagerly waiting for Tony Da to unveil San Francisco in a new avatar.