← Thank you for the Liebster Blog Award
Lest we forget: Singur Black Day →

Before I elucidate my charge, a brief introduction on the characters in this narrative.

Lutyens’ Delhi is an enigma. It is the Mecca of power-brokers, administrators, journalists and of course the gossip-mongers. Social media too has been bitten by the Lutyens’ bug. Several Twitter accounts like “Lutyens’ Spice”, “Lutyens Masala”, “Real Lutyens” and “Lutyens Insider” are dishing out a good dose of gossip and rumours about Delhi’s politicians, journalists and businessmen.

Lutyens Masala is undoubtedly run by a right-wing’ journalist (some say it is the journalist who was once associated with a website laughingly referred to as NaMoCentral). His tweets are never direct. You have to be an expert on ciphers and codes to make  any sense of what he has posted. He has a code name for everyone – often bordering on outrageous, but cleverly thought out. And there even exists a cheat sheet with all the decoded names.

A literal translation of the name would mean Ajit Doval. He is the National Security Advisor. He is the founder member of Vivekananda International Foundation, a right-wing think tank.

Lord of the Man

Man – Nar. Lord = Indra. So, Lord of the Man is Narendra. Obviously the reference here is to the Prime Minister of India.

The devious plan of BJP to conquer power in Bengal at any cost. No expense to be spared. National Security Advisor of the Prime Minister is involved in party work??? No expense or effort to be spared??? 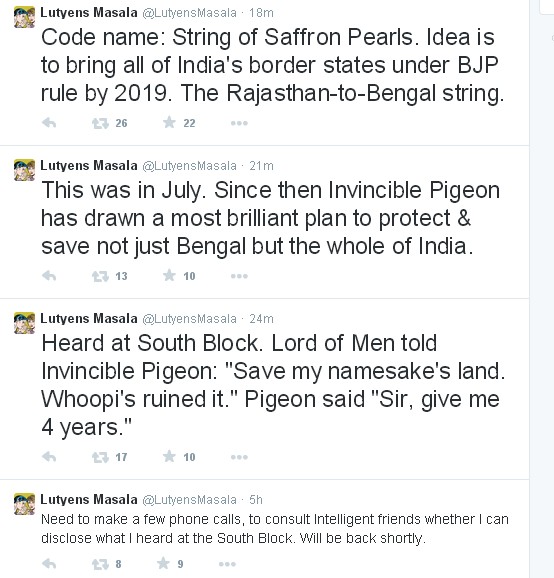 If this is not shocking enough, there is more. Clearly, the recent events in the State are part of a grand conspiracy to destabilise Bengal, incite violence and create a situation where BJP can usurp power by imposing Article 356. They know if they seek people’s mandate, they cannot win even 29 seats by fair means, let alone 294. 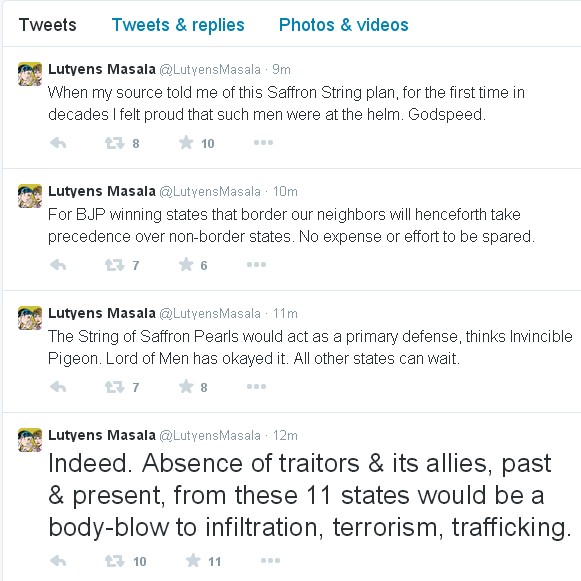 After 34 years of Communist misrule, Bengal was slowly turning around. Despite propaganda by a few supari-journalists and media houses that think they are more powerful than God, despite malicious lies being rattled day in and day out, people were receiving the benefits of change. The 2014 Lok Sabha polls have made the BJP greedy. They are desperate to gain foothold in Bengal because their strength in the Council of States is not up to the mark. 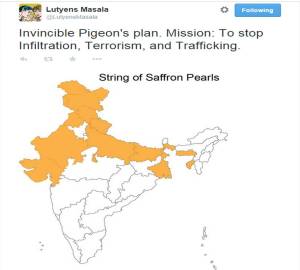 Bengal has had a long history of communal amity. We have had icons like Rabindranath who have written scathing essays on Nationalism. The soil of Bengal gave birth to stalwarts like Swami Vivekananda who spoke of universal brotherhood. Now his namesake is trying to quench his hunger for absolute power in order to become the Fuhrer by trying to destroy the bond of unity that holds Bengal together.

[Decoded to: A BHODROLOK FROM WB IPS CADRE TELLS ME… DAVOL… EXPECT PRES RULE BY FEB]

The dice has been cast/ Conspiracy is afoot to usurp power from a democratically elected government. But Bengal knows resilience. Bengal knows rebellion.

Dori dhore maaro taan, raja hobe khan khan (Pull the strings my friend, the King – who won thanks to 6 lakh bogus voters – will meet his fate in dust).

Disclaimer: The writer of this post takes no responsibility for the tweets posted by Lutyens Masala or the cheat sheet shared by his followers.

← Thank you for the Liebster Blog Award
Lest we forget: Singur Black Day →