Feluda is back with a bang – Badshahi Angti Review 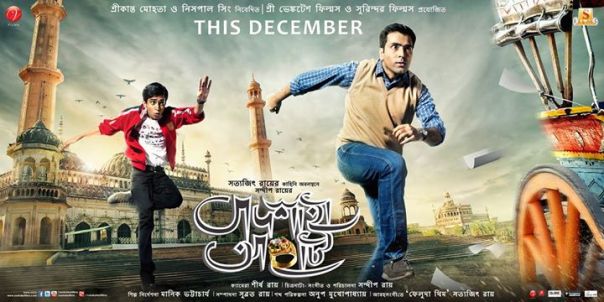 There was a time when Christmas was synonymous with Feluda. The tradition met with an untimely break in 2012 due to the sudden demise of Bibhu Bhattacharya; even Sabyasachi Chakraborty had aged… Feluda needed a break and deservedly so! But after a gap of 3 years, Feluda is back with a bang!

The action has shifted to the Golden City of India – Lucknow. Badshahi Angti, the second novel in the detective series, brings back Bengal’s favourite sleuth. Aabir Chatterjee is absolutely ravishing in the role. His facial expressions, use of “magajastro”, the Bangaliana – everything is just perfect. I don’t think people will have any difficulty accepting him as Feluda, even though he has also portrayed Byomkesh on screen!

Badshahi Angti – the film – was not well written. It had the gloss, some element of thrill, but the script lacked the punch the original story had. The climax was dull when it could have sent the audience into an adrenaline rush! In the end Badshahi Angti turns out to be a damp squib.

However, one must credit Paran Badyopadhyay for putting in a great performance as Banabihari Sarkar. Dipankar Dey as the father of Topshe is wasted. The flawless Bangla accent of Bharat Kaul as Dr Srivastava is surprising. Sourav Das is promising but not as good as Topshe should be; he lacks the spark.

All in all, thank you Sandip Ray for bringing Feluda back. Looking forward to Gangtok E Gondogol next Christmas. Thank you for using the original Feluda theme in the end credits.