Book Review: The Curse of Surya by Dev Prasad 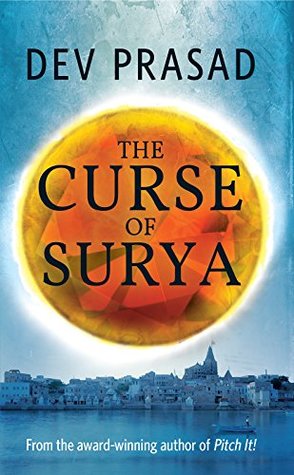 The Curse of Surya is a fast-paced thriller set against the backdrop of Indian mythology. I would not be exaggerating if I said Dev Prasad is India’s answer to Dan Brown. There is a dearth of good thriller writers in India. The few we have are repetitive or lack originality. This novel comes as a big surprise. Believe you me, this page-turner will keep you hooked until the end.

The plot involves three protagonists from different parts of the world who stumble upon each other in India. Twist of fate brings them together in a race against time to find Shyamantaka, the famed jewel which was lost 5,000 years ago. The plot is centred around Shyamantaka which Surya, The Sun God, gave to his disciple Satyajit as a boon. However, the jewel comes with a curse as it “can result in misunderstandings, fights, thefts and wars.”

The story is set in Krishna Brijbhumi encompassing various cities in a particular region in Uttar Pradesh, around Mathura and Vrindavan, where Krishna is believed to have lived. The descriptions, factoids and information capsule that the author provides as you turn the pages clearly shows how well-researched the book is. This is a treat for anyone in India  mythology and history. The crisp detailing, fluid narrative, simple language and short sentences are an added advantage.

International All Saints’ World Religions Conference at Krishna Janmasthan Temple in Mathura a day before the Presidents of Singapore and India will organise a photo-op at the Taj Mahal in Agra. It is believed that the location of Shyamantaka will be revealed at the Conference. A day before the Mathura event, a Tibetan is mysteriously murdered at Krishna Janmasthan temple. Incidentally, he was a reporter working for Channel 7 TV, Singapore. His colleague Sangeeta is sent to India to cover the Presidents’ meeting at Agra.

Sangeeta meets Alan Davies at the Taj and her heart skips a beat; they bond over coffee and decide to go for the conference at Mathura. Sangeeta hopes to find clues about the death of her colleague. However, fate has different plans for them. The narrative moves in the Dan Brown-ish format; every chapter begins at a different location and time. The author has imbibed hugely from Dan Brown’s writing; the protagonists are embroiled in cracking codes, solving historical puzzles in the hunt for a historical treasure that can destroy the earth.

Sangeeta Rao, the fearless reporter from Singapore will remind you of Sydney Sheldon’s novels which also have strong-willed, determined women as protagonists who fight against all odds. Unsurprising because the author has admitted in many interviews that he is a fan of Sheldon’s works. She and Alan not only fight against terrorist organizations in the quest for Shyamantaka but also against SP Nisha Sharma who thinks they are fugitives and thus wanted by law.

Overall, The Curse of Surya is a good rapid reader for a long train journey. After a long time, India can proudly boast of a mythological fiction that will keep you glued till the end.