← Pink and Parched – Triumph of Indian cinema
Book Review: The Peshwa – The Lion and the Stallion by Ram Sivasankaran → 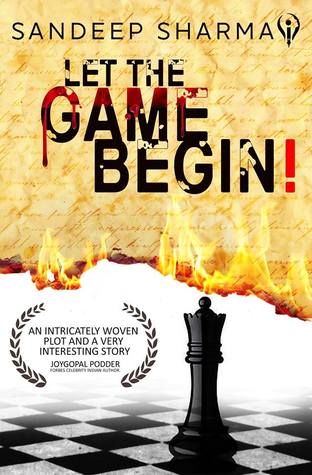 Thanks to Dan Brown, Amish and Ashwin Sanghi, there is a growing number of novels being written in the historical fiction/mythological thriller genre, much to the delight of readers like us. Indian mythology and history is a treasure trove for authors to weave gripping tales combining the myths of the past with the thrills of the present. ‘Let The Game Begin’ by Sandeep Sharma surely doesn’t disappoint.

The story covers a span of 4000 years and hinges on the arch rivalry of two mythical kingdoms Sarprakt and Chaturanga. The two kingdoms are separated by a mystic mountain range Lambasa Parvat. In a turn of events, and amid a shocking conspiracy, King Viratha of Chaturanga loses his son and heir to the kingdom Devrat. A curse befalls the whole kingdom, which has ramifications in the future.

Thousands of years later, in present day India, several serial killings shock the nation. The only clues that are chess pieces and a strange message in an ancient script which says ‘let the game begin’. As the police struggles with solving the mystery, CLAW, an intel group that reports to the PM takes over the case because of threat to national security. What unfolds is an enthralling tale of revenge, conspiracy, deceit and treachery.

For any thriller the narration is the key element that keeps the reader’s interest intact in the plot. Sandeep Sharma does a good job with constant twists in the plot. The narrative swings between the past and the present – a standard in most mythical thrillers – and slowly the conspiracy unfolds. That constant nagging feeling of ‘what happens next’ and ‘so why did this thing happen earlier’ keeps you pacing towards the climax. The characterisation has been given due thought as well.

Although the language is lucid and flowing, the author must check for grammatical and typographical errors in the future editions of the book. I am surely looking forward to reading the sequel.

P.S. I received a review copy of the book from the author.

DISCLAIMER: All Images Used In This Book Have Their Respective Copyrights

← Pink and Parched – Triumph of Indian cinema
Book Review: The Peshwa – The Lion and the Stallion by Ram Sivasankaran →