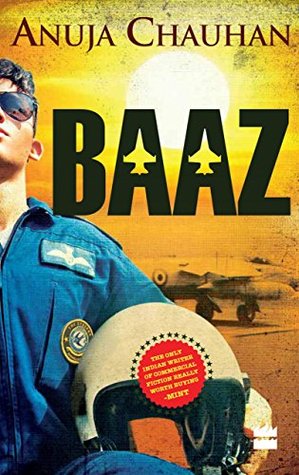 Anuja Chauhan is my favourite contemporary Indian writer in English. She has made ‘Hinglish’ cool, her novels are witty with strong female characters in the lead till date she has gifted us male protagonists worth crushing over, in every single novel. From Nikhil in ‘The Zoya Factor’ to Dylan is ‘The House that BJ Built’ or Sammar in ‘Those Pricey Thakur Girls’ – one would find it difficult not to fall in love with the hot and uber-cool men of desire in Chauhan’s novels.  Ishaan “Baaz” Faujdaar is no exception.

Baaz is a romance set in the turbulent period of 1971 when India was securing her borders with Pakistan, while helping Mukti Vahini in then East Pakistan fight for their freedom. We are taken for a ride to the enigmatic world of Indian Air Force. Ishaan’s love interest Tehmina Dadyseth is an antithesis. Born in an army family, and having lost a family member to war, Tehnima is opposed to it. Like opposite poles, they too are attracted to each other despite the clash of ideologies.

Written in a true Anuja Chauhan style, the book brings out the horrors of war poignantly. There are massacres, savage butchery, brutal murders. Ishaan himself is designed to kill and has no qualms about it; he would do anything for the motherland. On the other hand we have Tehnima who gives dance lessons to the children of refugees. Kudos to Anuja Chauhan for dealing with a grave subject in the best possible manner.

In fact, calling ‘Baaz’ a romance set in the times of war would be a disservice to the amazing work by Anuja. It dwells on several emotional flashpoints – from strained family ties to elements of nationalism. Written in the most uncomplicated language, the dialogues are the winner in this war novel. It is an absolute page-turner like Chauhan’s earlier works and would keep you glued till the end. And that surprise (no spoilers) in the climax was too much to ask for.

I would surely love to see this being made into a film one day.

P.S. – This review is part of the Flipkart Bloggers’ Affiliate Programme