Durga Pujo is upon us. The autumnal festival that celebrates the divine feminine, has gripped the City of Joy, and how. Braving the torrential downpour, people have begun pandal hopping, dressed in their best clothes. 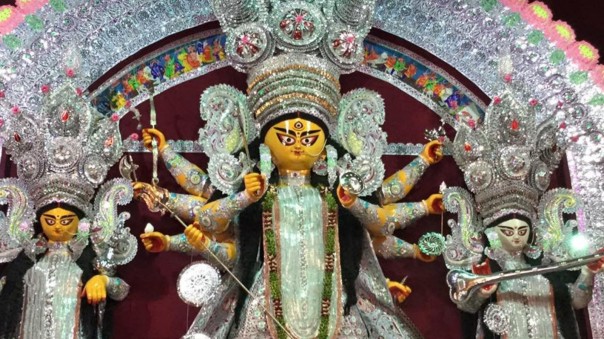 As it was pouring on my way to work today, I was immersed in my thoughts. Is it merely coincidental that it has been raining incessantly for the past one week, causing floods in many States? Does it have to do anything with Maa Durga’s arrival on a horse this year?

Depending on the day of arrival or departure, the type of ride is mentioned in the scriptures:

In simpler terms, if Saptami (the day, Maa Durga’s ‘pran protistha’ is performed) falls on Sunday or Monday, Maa Durga’s ride is elephant. The result is ‘Soshyopurna Basundhora’ (earth with abundance of crops). Similarly, if She arrives on Saturday and leaves on Tuesday, the ride will be horse. The result will be ‘Chhatrabhangastu Rangame’ (calamitous destruction).

If Maa Durga arrives/leaves on Wednesday, the mode of travel will be boat. This will result in ‘Sashyabriddhistha Jalam’. Which means that there will be a rise in the productivity of crops. However, there will be deaths due to floods. Meanwhile, if she arrives on Thursday and leaves on Friday, then the ride will be palanquin, resulting in an epidemic (Marakang Vabatu).

This only goes on to show that the elephant enjoyed immense respect among the Rishis who devised the scriptures. It is associated with good fortune. The other means of transport are all inauspicious and symbolise death and destruction.

One may brush this off as mere superstition. But the calamitous floods that have wrecked lives across the country, only make me wonder if the ancient sages were accurate in their vision.