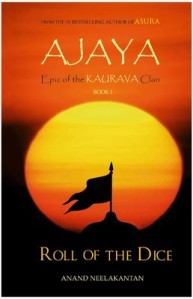 The book Ajaya: Roll of The Dice begins with the Kauravas and Pandavas as children, each gradually displaying the temperament and skills. The princes grow up and the plot unfolds and we are introduced to the various shades of the personality each character has.

The author beautifully portrays the mindset, lifestyle and caste domination of the Mahabharata time, dexterously interweaving a series of pre-battle events and confrontations that eventually coalesce in unfolding the dramatic tragedy. Conventional narrations of the Mahabharata overlook facts he has skilfully incorporated into the narrative.

The book shows Suyodhana questioning the norms which uplifted a few and banished the rest to poverty, to survive on the whims and fancies of the superior castes. In a rare and clear-eyed portrayal, the book shows him as a man of unwavering convictions. Suyodhana is depicted as a man who unflinchingly believes that merit and not caste ought to be the basis of education, reward and recognition.

Like Asura, the author again shows that every human being has more to their personality than what meets the eye. Conventional telling of the epic have always assumed the Kauravas and Pandavas were men made in black and white. The author reminds the reader that Ram and Ravan reside in everyone.

The Mahabharata endures as the great epic of india. But while Jaya is the story of the Pandavas, told from the perspective of the victors of Kurukshetra; Ajaya is the narrative of the unconquerable Kauravas, who were decimated to the last man. At the heart of India s most powerful empire, a revolution is brewing. Prince Suyodhana, heir of Hastinapura, stands tall, determined to claim his birthright and act according to his conscience. He is the maker of his own destiny or so he believes. While in the corridors of the Hastinapura palace, a foreign Prince plots to destroy India. And the dice falls…