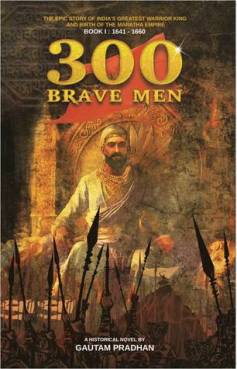 Chhatrapati Shivaji Maharaj is one of the most revered and celebrated kings to have ruled India. Tales of his valour have become part of the folklore. So much so, that it often becomes difficult to separate history from fiction.

Gautam Pradhan’s book explores the period of history when the Indian sub-continent was ruled by the Mughals in the north and Shia rulers in the south. Sandwiched between the two regimes, the Maratha province was silently bearing the tyrannical rule of injustice, until the sixteen-year-old son of an Adilshahi jagirdar stood up against the empire.

‘300 Brave Men’ is an intriguing retelling of the legend of Chhatrapati Shivaji Raje Bhosale, the warrior-king, guerrilla fighter, brilliant tactician and clever diplomat. Expectedly, we are taken through the reign of torture and servitude under the Mughals – high-handedness of the army, wars that ravage terrains, crops that are burned, villagers bearing the brunt of tyranny, women raped and tortured.

The book gives us an insight into the various facets of Shivaji’s character – how he won his first ‘battle’ at the tender age of 15, with diplomacy. We are also taken through how he tastes victory against the Sultanate, despite having military strength, which is no match to that of Delhi. The book speaks of length of the humanitarian nature of the Maratha king.

However, the book fails to make an impact because the drudgery of reading through such a long volume of work feels tiresome. It also seems the author is trying to offer an alternative view of history in his work. In this age of hyper-nationalism and post-truth, the exercise is fraught with dangers. On a personal level, having grown up listening to the tales of how Bengal was plundered by Maratha Borgis, the narrative of Maratha suffering often appeared a bit misplaced.

However, the author deserves credit for bringing to life a glorious icon of Indian history. Surely, even in fiction, his actions will inspire generations to come.

P.S. The review copy of the book was provided by Leadstart Publishing