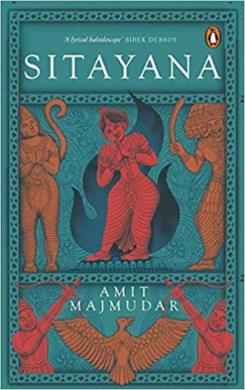 Indian mythology is replete with stories; there are tales galore that are waiting to be told. Even when you think you have read a book and know it from cover to cover, there may be details that skipped your eye.

Our Indian epics – Mahabharata and Ramayana, with their voluminous takes on everything under the sky are not easy to master. Hence, with the new wave of writers trying to re-explore these centuries-old tales always fascinate me, and intrigue me.

And then there’s the problem of plenty – or should I say, too many? There’s a crowd out there – of writers and their own take on the epics. Some are good, some not worth the salt. To stand out in the clutter is a task that only experts can boast of. Amit Majumdar does just that in this book.

Sitayana stands out because of its simplicity. The story is not unknown, and the author does not intend to tread that path. It is the structure of the narrative and the use of language that sets this novel apart.

Sitayana tells the story of Ramayana from the perspectives of not only Sita but different other characters, from Hanuman to Mandodari, Lakshman and even the tiny squirrels. Although it is a refreshing change to hear the myriad voices in the epic, and how they would’ve viewed the events that occurred, it often came across as cluttered and break in the flow of the narrative.

Sita’s story begins in the Ashok Vatika, where she is imprisoned by Ravana. She is reminiscing her childhood when she lifted the might bow of Lord Shiva. The narrative fast moves to her Swayamvara. And suddenly we are introduced to Hanuman and Mandodari’s version of events.

For a book titled “Sitayana”, I was expecting Sita to be the ‘sutradhar’ for the entire story, which was not the case. While I did appreciate the hard work that went behind erecting this narrative from multiple perspectives, I fathom why Sita was denied the significance, she as the titular character deserved.

Apart from that disappointment, Amit Majmudar has not failed to impress the fan of Indian mythology in me. It is a herculean challenge to retell the story of Ramayana from the perspective of so many characters. And he has succeeded in his task. His creativity shows in the fact that the entire novel has the compression of a poem.

The biggest strength of the novel is in its language. Although simple, there are myriad little puns and references which are easy to miss. A careful reading, with care, would make even the mundane sentence appear magical. Therein lies the success of Amit Majmudar.

Sitayana, in the end, strikes a chord, not because it has a non-traditional world-view of a story well known, but because it captures the essence of Ramayana and places that before us without any pretence or rectitude. 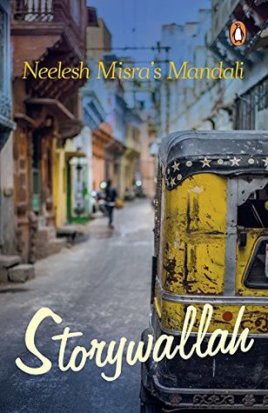 Neelesh Misra is a name to reckon with in radio. The Neelesh Misra Show on Red FM is immensely popular among the masses, and people long to listen to the tales narrated by Misra in his inimitable style. He is also a celebrated writer in Hindi and an acclaimed lyricist.

Neelesh Mishra has spearheaded a project called  the Gaon Connection, India’s biggest rural media platform, and is also the founder of Mandali, which provides platform to emerging writers in the country. The book ‘Storywallah’ is a collection of short stories, penned by the writers belonging to Mandali.

I must confess, I agreed to review this book, smitten by the beautiful cover of the book. Translated for the first time in English, this collection represents the best of Mandali writers. Often, when stories are translated, the basic emotions behind the words get lost in translated. This has been true for many Bengali stories I have read in English (barring a few notable examples). However, these stories strike a chord, may be because I have not read the originals.

These stories, 20 of them, tell the tales of modern India, as well as Bharat. From the small towns and rural settings, the stories move to the hustle bustle of big cities like Mumbai and Delhi. They introduce us to ‘homesick yuppies’ who long to reconnect with their hometowns, old lovers who reconcile against all odds, parents who learn to adjust with their grown-up children, or the mother-in-law who uses questionable tactics to bond with her distant daughter-in-law. There is a story involving a war widow who learns to stand up to family, and also how fate brings two strangers closer.

While we empathise with the divorced girl as she confronts her dilemma, we also appreciate the bonds of trust and friendship in together. Then, there is the unconventional take in ‘The Overcoat’ where a girl finds the true meaning of life, through someone else’s life.

There is an undercurrent of love flowing through each of these stories. Relationships dominate the narrative. The conventional disdain of anything out of the ordinary is questioned. Ties are tested against the changing tides of time. Love is an experience, which no matter how much you wish to ignore, will always be a part of your existence. Credit goes to the Mandali for taking us through the various facets of it.

While some of these stories could have been written (and edited) better, the effort and initiative is highly commendable. And the credit, for sure, must go to Neelesh Misra, for without him the Mandali would not exist.

DISCLAIMER: All Images Used in this Post Have Their Respective Copyrights