Bengalis are known all the world over for their sweet tooth, and why not? With varieties like Sondesh (dry) and Rosogolla (syrupy) and the entire jamboree in between, one can always find an excuse to indulge in the sweet revelry. Now, I have been asked by Atrai to share my top favourite sweets and this has put me in a quandary. How to select just 10 names when you can grab them all?

When you put a piece of Malai Chumchum in your mouth, you will forget about all your worries and savour those moments of bliss. The softness of the chumchum, accentuated by the taste of the cream is definitely a ‘cardinal sin’.

A sondesh with a liquid filling in the center, this is perhaps the most common ‘dry’ sweet in Bengal. 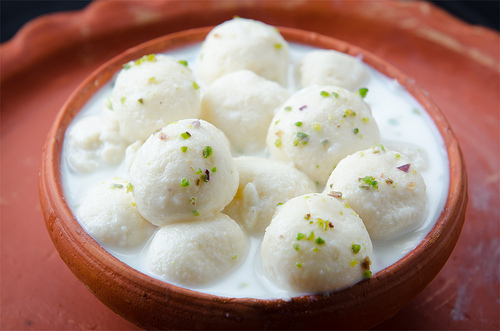 A must-have at weddings, Rosomalai is best savoured after a sumptuous meal. 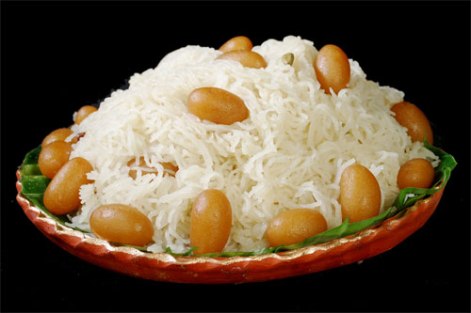 This is nostalgia; the best companion for winters. The taste of jaggery accentuates the charm of the ras (syrup).

If you are visiting Bengal, never ever forget to taste the Gangarampurer Mishti Doi. Red in colour and sweet in texture, the sweet curd will complete your Sunday lunch.

A bowl of hot pantua/ledikeni topped with ice cream. Heaven on earth. 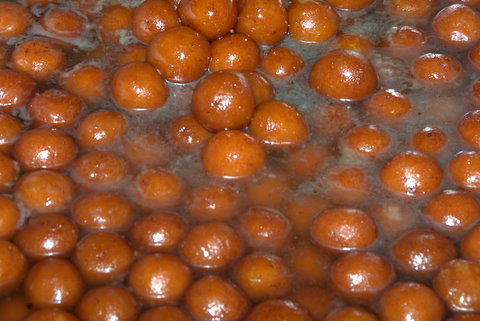 The trick is to gulp down an entire lyangcha at one go.

Best competition one can enrol in – how many Rosogollas can you eat at a wedding. My highest count is 25. 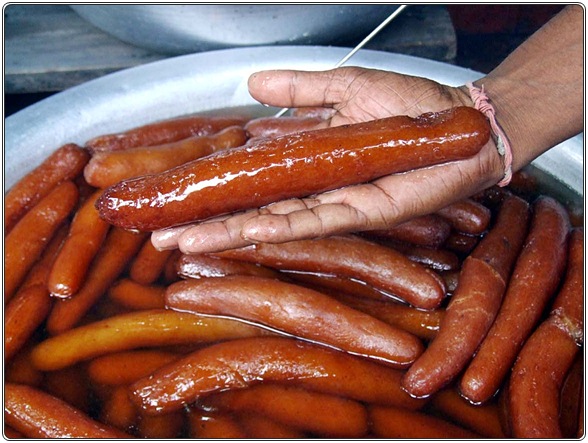 I nominate all my readers for this challenge. Let’s put our sweet teeth to task 😀

“What does Durga Pujo mean to you” – if this question was put to an audience, the response would be varied. Fun, festivity, tradition, pandal hopping, get togethers, going back to family – Durga Pujo cannot be restricted to just the reference of Ramayan. And an inseparable part of Durga Pujo is the quintessential sweet dishes that are made as special offerings to the deity (only to be devoured by mortals later). 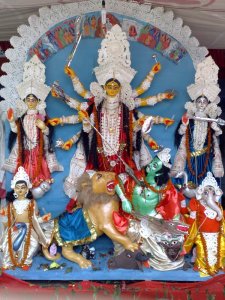 Bengalis are born with a sweet tooth. Known for their rosogolla and sandesh world over, many Bengali culinary dessert delights can put the world’s best pastry chefs to shame. From the pithe to naaru, a Bengali kitchen will never disappoint anyone who indulge in sweet nothings.

In this post i wish to share the recipes of some of the “prosad” that makes Durga Pujo so special (for me at least) :

Naaru or small coconut balls are nothing out of the ordinary but as the famous brand says “Ek se mera kya hoga?”. Found in two major varieties – brown and white – naaru constitutes the integral part of prosad in any Pujo. 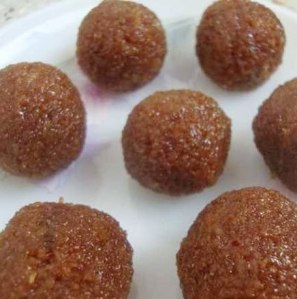 Take the jaggery and heat it to melt. When the molten jaggery is still hot add the grated coconut and mix well. Add sugar according to your taste and mix. Turn off the oven and let the mixture cool. Then make small balls and serve in a dish or store in an air tight container.

Many people add til or dry fruits to enhance the taste. It is up to the discretion of the maker.

[Naaru making starts on Mahalaya at our home and continues till Dashami. It lasts for a long time so you need not eat it all at one go, no matter how tasty it looks].

This one is my favourite and is a MUST for the Aparajita Pujo that takes place at our home after Durga idol immersion is over and everyone is back home for Bijoya. Again a coconut dish, it is a type of coconut barfi, but can have any shape – from a cone to square, rectangle, rhombus, pentagon or even shapes of animals.

Mix the coconut and sugar in a bowl. Take a “chhanch” (mould) and place the mixture in it to obtain shape of your choice. Tokti is ready. 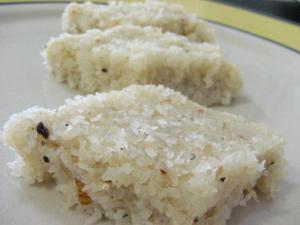 [To spice up this simple preparation, you can add dry fruits, khoya, chocolate, or molten jaggery. Easy to make and good to eat, Bijoya is made awesome with tokti].

[P.S. – Measurements are purely to give an idea of the ratio, the dishes are prepared on a much larger scale]

Murki without naaru is like Jay without Veeru. Made from khoi and jaggery, it can easily be eaten with anything from tea to chicken gravy (yours truly tried it all 😛

Making murki is not difficult at all. First you have to separate the “bad” khoi from “good khoi” just like one cleans rice grains. Thereafter, melt the jaggery and add the khoi to it. Mix well and make sure it forms a semi solid lattice. Now store the murki in a air tight tin.

Made famous by Jaynagar, moa is a dish with variety. Moa can be made from muri (puffed rice), chire (chiwra) or mix of milk and either muri or chire. Moa is best if served with tea but it doubles up as prosad too. 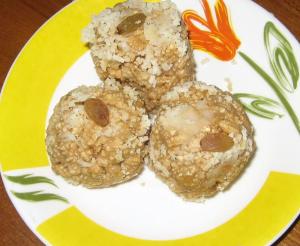 Just like you make murki, follow the same procedure for making moa (just replace khoi with chire/muri). In the end make balls with the mixture. Your moa is ready 🙂

When i was a kid i used to call mihidana a brother of Bundiya. They are same in all respects, except the size and taste. Mihi means small or smooth and dana means grains. It is made by making a batter of besan and water and adding it to a sieve with tiny pores to allow small grains to fall in the oil where it is fried. When they turn yellow in colour, they are removed from oil and placed in a bowl containing sugar syrup.

Mihidana is a MUST for the Dashami breakfast. Served as dessert after Luchi and chholar daal, mihidana makes up for the gloom for imminent separation of Ma Durga. Well almost……..

This is an Ashtami/Sondhi Pujo special and very simple to make. The same way payesh (or kheer) is prepared with rice, chhanar payesh is made with chhana or paneer.

To prepare Chhanar payesh, boil about 2 cups milk in a bowl and a tea spoon of lemon juice to it. When the milk is curdled, separate the curd from the excess water and make small balls out of the chhana. (If you are using paneer, you need not go through this step and directly make small cubes). Add these chhana balls to a bowl of boiling milk, add sugar and stir well. After about 15 minutes add cream and your payesh is ready to be served. 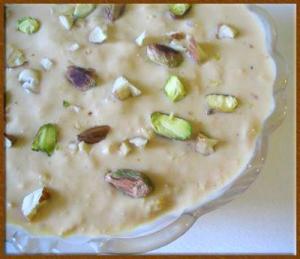 The name says it all. This is a special ghol/lassi made in our home on Nabami. The recipe is a family secret and traditionally passed on from a generation to the next. Offered to Ma Durga and then served as dessert during the lunch, it helps us digest the mutton and pulao which is mandatory on Nabami 🙂

Durga doi is also offered as prosad on Dashami. The elders say it is offered as food for the journey back to Kailash.

I promise to come up with some mouth watering Pithe recipes in January. Till then savour these delights and enjoy the Pujo with joy. Sharadiyar Subhecha and as they say – Bolo Durga Mai Ki……………..