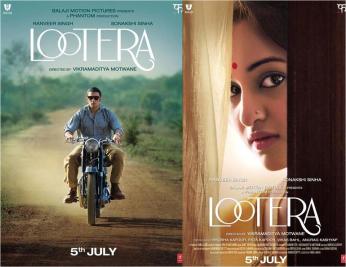 The fact that I am neither a fan of the lead actors nor did I find the director’s previous film worth the hype, didn’t stop me from taking  decision in favour of watching Lootera. The trailer of the film was so beautiful that one could hardly say a no to watching the movie. Despite a few anachronistic slips here and there, and a weak plot, Lootera successfully manages to create a niche in your heart. The visual masterpiece remains etched in your mind even after you leave the theatre and go about your daily life.

Director Vikramaditya Motwane sets his adaptation of O’ Henry’s classic short story “The Last Leaf” in the 1950’s, albeit making it his own. Right from the first frame the director sketches a beautiful painting that attains completion in the lush green fields of Bengal and the snow-capped hills of Dalhousie. The eye for detail, whether it is the depiction of a waning Zamindari in Manikpur, or the nuances of Bengali life in that decade, will compel the viewer to accept that Motwane has arrived, and how!

But the film essentially belongs to the chemistry between the lead pair, which they do full justice to. Sonakshi Sinha reveals her acting prowess with a powerhouse performance as Pakhi. Right from the pampered Zamindar girl to the woman who lost everything for love, her expressions stand out in every scene. The brilliant lighting and photography add a gracious charm to the actor’s persona, bringing out a charm of the yesteryears. Ranveer fails to amaze as much as his love interest, and his expressions often come across as wooden.

In the end, it is love who walks away with the trophy of the film’s mainstay. Supplemented by the haunting soundtrack, the narrative will make you a fan of old school romance.

Lootera is like a cuppa coffee that you would savour on a rainy evening as the drops lash against your window.