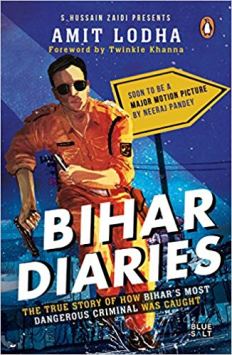 Amit Lodha, an IIT passout, who went on to make a career as an IPS officer, had shot to fame for his contribution in making the crime rate dip in Bihar. His latest book “Bihar Diaries” chronicles his real life experiences in the ‘notorious’ State. He has been felicitated with prestigious awards like President’s Police Medal for Meritorious Service, the Police Medal for Gallantry and the Internal Security Medal for his exemplary work.

With a change of guard in 2005, Lodha notes, a wave of “sushasan” or good governance, began in the State. It is during that time that Lodha, an award-winning IPS officer, was posted in Shekhpura. His trysts with criminals, and how he worked towards ending the ‘jungle raj’ of routine kidnappings, murders and rapes, make for a fascinating read.

When Amit Lodha was posted in Shekhpura district as an SP, the quaint mufassil town lived under the terror of a dreaded criminal (who has been referred to as Vijay Samrat in the book). “The Gabbar Singh of Shekhpura” – as Lodha calls him – commanded fear from one and all and his writ ran large. The police force, which was hugely understaffed, was hardly any match for him.

Although Lodha was quite disappointed with his posting – he, like any other serving officer, wanted a ‘good posting’ in an urban area – sprung into action once he arrived in Shekhpura. A jailbreak and a brutal massacre impacted him deeply, that led to the change in his attitude. What follows is a cat-and-mouse chase that will make your heartbeats soar and adrenaline rush through the veins. The thrilling ‘adventure’ that Lodha describes in his book, pans three states, ultimately resulting in the arrest of the fearsome criminal.

Not without reason is “Bihar Diaries” is soon going to be adapted into a motion picture by renowned filmmaker Neeraj Pandey. As the foreword by Twinkle Khanna says, Lodha’s story is no less than Rowdy Rathore or Dabangg. The story has all the ingredients of a steamy potboiler, with action, emotions and thrill added in dollops. The book makes for a breezy read, with the pacy narrative and lucid writing.

Posted on July 18, 2018, in Personal Musings. Bookmark the permalink. Leave a comment.