[This article was originally written for and published in Gaylaxy Magazine]

This piece of news should not come as a surprise to anyone. Published in the Nature magazine in April 2011, it made headlines everywhere. A possible molecular mechanism of human (and animal) sexuality is unfolding itself and i wish to present before you an excerpt of the letter which gives us hope –

“Although the question of to whom a male directs his mating attempts is a critical one in social interactions, little is known about the molecular and cellular mechanisms controlling mammalian sexual preference. Here we report that the neurotransmitter 5-hydroxytryptamine (5-HT) is required for male sexual preference. Wild-type male mice preferred females over males, but males lacking central serotonergic neurons lost sexual preference although they were not generally defective in olfaction or in pheromone sensing. A role for 5-HT was demonstrated by the phenotype of mice lacking tryptophan hydroxylase 2 (Tph2), which is required for the first step of 5-HT synthesis in the brain. Thirty-five minutes after the injection of the intermediate 5-hydroxytryptophan (5-HTP), which circumvented Tph2 to restore 5-HT to the wildtype level, adult Tph2 knockout mice also preferred females over males. These results indicate that 5-HT and serotonergic neurons in the adult brain regulate mammalian sexual preference.”

The role of limbic system of the brain in controlling emotions like rage, sexuality, love, revenge etc. is known. That levels of neurotransmitters act as ON/OFF system evoking (or disbanding) responses in us, was a speculation until recently documented by scientific evidence. The role of serotonin in determination of sexual behaviour of males is certainly a great breakthrough.

Since most of you are not well acquainted with biological terminology let me in gist explain to you what this experiment tells us.

The experiment carried out in mice was based on the hypothesis that sexual behaviour and preference in mice was directed by serotonergic neurons (nerve cells which secrete the neurotransmitter Serotonin; neurotransmitters are chemicals which help in cell-cell communication between nerve cells). It is known from previous research that male mice with intact serotonergic neurons prefer females over males. 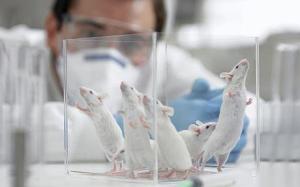 The scientists knocked out the gene encoding the enzyme that is required in the first step of serotonin biosynthesis in the system. These mice became deficient in serotonergic neurons. The scientists observed a behavioural change in them. The mice lacking serotonergic neurons were not attracted to female mice anymore (although their pheromone system was working fine).  However supplementation of a substrate that bypasses the deficient enzyme step; restored the mice to their wild type behaviour. This was an indication of the role of serotonergic system in determination of sexual preference in mammals.

The paper concludes with a note on future prospective of research. They are hopeful of replicating their findings, in mice, in human system. Previous research on differential brain stimulation in homosexual and heterosexual men (which i reviewed in the last issue) could throw some light to that effect. Also, efforts are on to identify the gene loci responsible for human sexuality.

We can be hopeful that within a decade the mysteries shrouding human sexuality shall be unravelled and we will have a solid reason on which we can lay the foundation of our case that being homosexual is not unnatural.